Find out more about the thermal coefficient of windows

In the course of constructing or renovating a house, each new piece of equipment must be carefully selected not only on the basis of aesthetic but also, and most importantly, on the basis of technical considerations. In this article, we review various heat coefficients for windows.

The use of thermal insulation coefficients

There are many challenges in designing windows and glazed casement doors and windows. Several factors need to be taken into account during the design process. Among them, two are the most important yet at first glance they appear to be contradictory:

Each of these factors can be determined using a coefficient that can be calculated for each window according to its design, materials and installation quality. Finding the right balance between the different coefficients helps:

In calculating the energy loss of a window or other casement doors and windows, different coefficients are usually used. These factors take into account the insulation performance of the window frame, the glazing and the effect of the thermal bridge in the contact areas between the frame sections and the glazing. The average of these different coefficients is used to calculate the overall thermal transmission coefficient of the window, and therefore the average energy loss during the year.

How are heat loss coefficients expressed?

The different coefficients are usually expressed in W/m2 x K, also stated as W/m2.K. Under this formula, the Watt is an energy unit, which also appears in the form of kWh in the electricity or gas bills. On the other hand, Kelvin is the basic temperature unit used in the international measurement system. In this case, a deviation of 1K is equivalent to a deviation of 1°C. For example, in France, a deviation of 1K means exactly the same thing as a temperature difference of one degree. The coefficient is calculated, as shown in the formula, by taking into account the performance of one square metre of the glazing. This provides an absolute value for calculating the energy loss of each pane in relation to its own surface area. For each glazing unit, the loss coefficient is then multiplied by the number of square metres of the actual surface area.

The bottom line is that a good coefficient has a low coefficient. The smaller the coefficient, the lower the energy loss. Although the attempt to find a low loss coefficient is relatively universal, it should be noted that it is not possible to obtain the same coefficients for glazing and frames made of different materials. 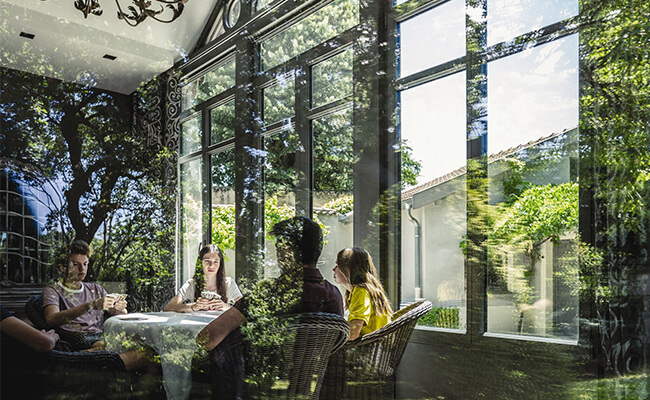 A window pane is usually the largest exchange surface between the inside and outside of a window. The percentage of glazing in sliding windows or patio doors is even higher which makes it essential to obtain the lowest Ug possible.

Just like in all heat transfer devices, the energy loss of a glass pane depends on the heat conductivity of the material from which it is made. Therefore, the very nature of the glass, its composition and structure will determine how and to what extent the glass conserves energy or, conversely, transfers it.

As a basic principle, glass is a fairly good conductor of heat and cold but is a poor insulator. This has long been the case with single glazing systems which, in some very cold environments, necessitated limiting the size of the glazing. Fortunately, the current double-glazing solutions are very efficient. In many cases, the glazed part of a window is even more insulated than its frame, which means that it is now often preferable to optimise the proportion of transparent surfaces in a casement door and window.

Double glazing operates by preventing the glass in the pane from transmitting heat directly to the coldest environment rather to the outside in winter and the inside in summer. To achieve this, double and triple glazing incorporates one or more heat-insulating layers between two thicknesses of glass. It is usually a neutral gas, with argon being the most common.

In order to prevent a little more heat from escaping during winter, one of the two panes of glass is equipped with a low emissive layer. It is often a very thin layer of silver, invisible to the naked eye, which traps infrared radiation containing high levels of heat inside the house. According to current standards, a Ug of double glazing in Metropolitan France is generally between 1 and 1.4W/m2.K. 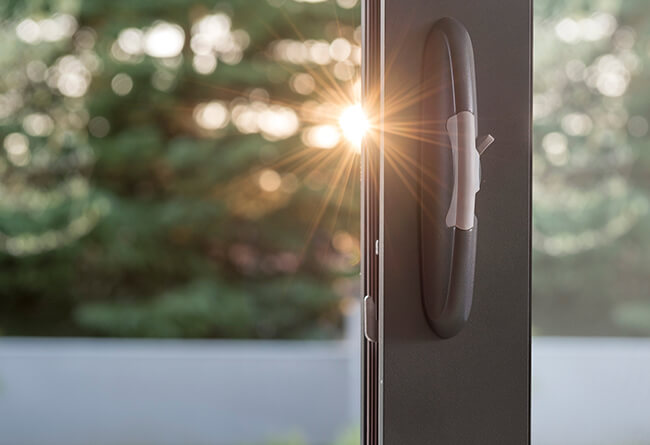 A coefficient specific to frames

Windows are relatively complex mechanical units comprising of casing, sashes, panes, overlaps, hinges, seals, and many other mechanical and electrical systems. All these components make up the opaque part of a frame, the fixed and movable frame around the glazing itself. Due to the complexity of these mechanical factors and the very design of a window, generally casements have a worse loss coefficient than the glazing itself.

However, the Uf is still calculated in the same way as the Ug. It also expresses the amount of energy that is transmitted through a given surface area of a window frame in relation to the temperature differential.

On average, steel or aluminium frames have a lower Uf value than wooden or PVC windows, which may be interpreted as a sign of higher efficiency. However, this is far from the truth! Given that aluminium structures are much thinner than their PVC counterparts, they take up a much smaller area. With the same size window, there is more room for the glazing itself, which provides a better loss coefficient and a superior contribution of light and solar heat. On average and depending on the size of the windows considered, aluminium equipment with a lower Uf can still have a more significant overall and realistic coefficient.
Find out more about the advantages of aluminium windows.

Ψ, a linear loss coefficient that is increasingly being taken into account

Unlike the other coefficients mentioned earlier in this article, the linear loss coefficient is not expressed as a function of a surface but rather as a function of the length of the connection between the frame and the glazing. Therefore the term W/m.K is used instead of W/m2.K.

In this case, it takes into account the heat conduction between the inside and the outside, which occurs through the different materials, the so-called heat bridge. Modern windows take Ψ into consideration by embedding thermal-break elements in their design. This improves the overall coefficient of the windows and prevents good Uf and Ug from being damaged by improper assembly of the frame and glazing.

All the coefficients mentioned above are considered when calculating the total heat transmission coefficient, which is also expressed in W/m2 x K. It is calculated by adding:

This overall coefficient is taken as the basis for calculating the total energy loss of a window. If this coefficient is multiplied by the surface area of the windows and the average temperature difference between inside and outside, it is possible to calculate the average loss of casement doors and windows and therefore the amount of energy that can be saved in a year by replacing the windows.